With just two stock exchange newcomers in 2014 the Number One Award for the No. 1 might at first glance be a little banal, particularly as the only rival FACC showed signs of weakness from the very first moment on and closed the year 24.67% below the issue price. Moreover, the No. 1 wasn't even a real IPO, but "only" a spin-off. Banal? Like I said, only at first glance: because what BUWOG achieved in the eight months of its listing in 2014 was thoroughly outstanding.Here are a couple of highlights: with an increase of 17.59% based on the value calculated for the spin-off from IMMOFINANZ, in 2014 BUWOG was the fifth best ATX stock, its inclusion in the key index having taken place already in September (that is, at first opportunity). And this position on the ATX was also clearly secured at the end of the year. 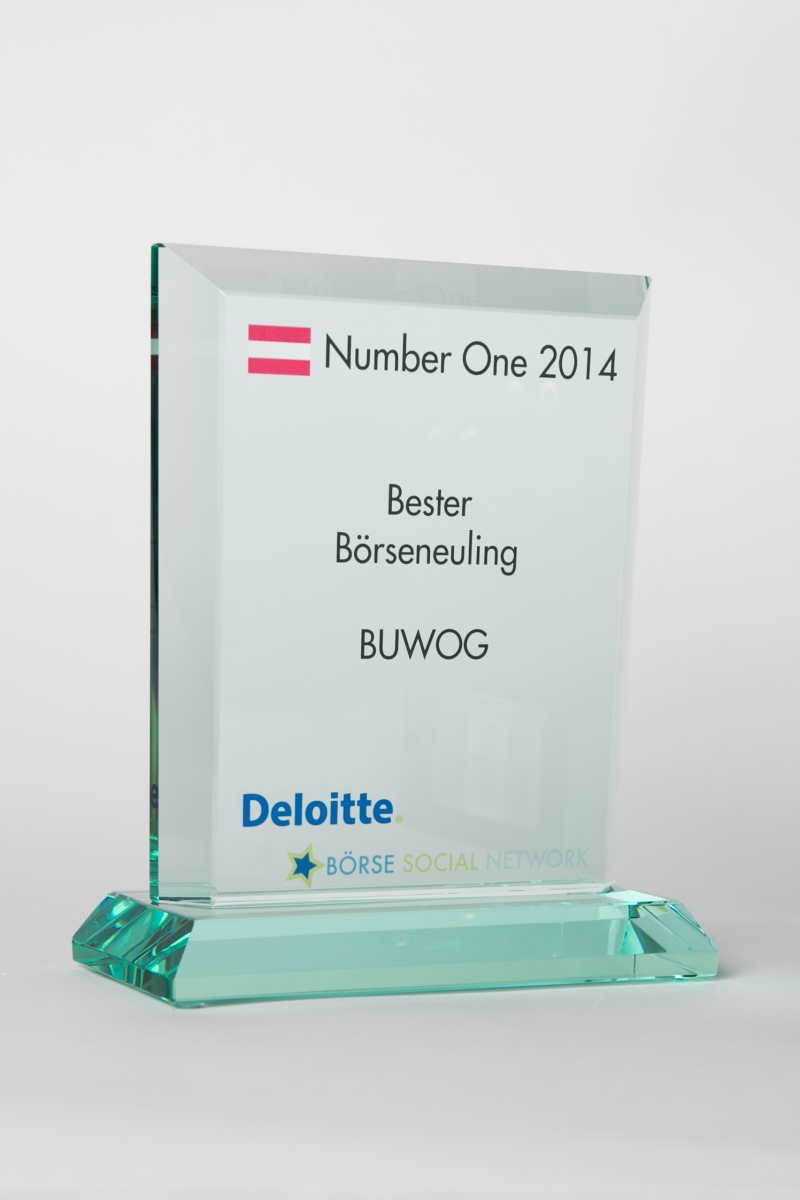 According to the ATX watch list for December 2014, BUWOG was No. 9 for turnover and No. 12 for free-float market cap. Though listed just eight months, BUWOG even ranked a strong No. 11 for overall turnover in 2014. With somewhat more than EUR 1.0 billion, it was only just behind big shares such as Vienna Insurance Group and Verbund. BUWOG has six market makers: specialist RCB, also Baader Bank, Close Brothers Seydler Bank, Erste Group, Societe Generale and Spire.

And BUWOG can also be called a major success for the Vienna Stock Exchange. Though BUWOG was actually aiming for only a secondary listing in Vienna (thus the stock exchange bell was rung in Frankfurt), in cooperation with the Vienna Stock Exchange it initially developed very well, particularly in terms of the index inclusion. In this regard the matter wasn't as easy with IMMOFINANZ.

What no one imagined: from the very beginning turnover of shares in Vienna was approx. 10x higher than in Frankfurt. After two days of trading BUWOG even had a higher trading volume in Vienna compared to then-ATX share Mayr-Melnhof (in September this share had to vacate the position for BUWOG) in the first four months since the start of the year. In the first two days of trading BUWOG's turnover was even stronger than that of Erste Group.

On the occasion of the inclusion of BUWOG in the ATX, CEO Daniel Riedl also pointed to the importance of the Vienna Stock Exchange for the company. BUWOG Group is deeply rooted in Austria, has its company headquarters in Vienna and the largest segment of private shareholders come from Austria. He was pleased that BUWOG Group's strategy was so well received, Riedl told the boerse-social.com newsletter.

In its current "Fachheft"  boerse-social.com provides an excellent outline of the top performers of 2014. The central idea behind the new "Number One Awards" was to also reward – often unappreciated, big background champions on the Vienna capital market. We conducted the research, found winners, and we honour them in the present bulletin, on the basis of hard facts. Our partner is Deloitte.

The other winners: http://photaq.com/page/index/1685 - special issue, bulletin 28:http://christian-drastil.com/fachheft28 (in German).

by
Christian Drastil
Your opinion is important

Our IMMOFINANZ-Newsletter provides you with updates on a regular basis.